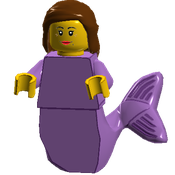 Recently, when I was watching an episode of Planet Earth I thought to myself that I should try and make a Lego version of an animal from that episode and as a giraffe was that episode, I decided to make it from Lego.  I used many different types of bricks to make the giraffe such as roofing and flat bricks to show different features of the animal.  Most of the bricks which I used were either yellow or brown as that is what colour a giraffe is with the exception of pink for the inner parts of the giraffe’s ears and for its mouth.  I added extra features such as trees, bushes, leaves and a parrot to add to the safari effect and enhance my giraffe design.

I decided to create this Lego piece to show that there is a market for safari animals to be made into Lego sets and to show that a simple design can be very effective.  I believe that if this was to be made into a set, it would be the start of a great thing as other safari animals could be made into Lego sets too such as lions and rhinos.  The design which I have created can be used as a display set.  No mini-figures are included.  I have estimated that the giraffe is made up of around 80 pieces of Lego, there 13 leaves, bushes and trees and one parrot within this set.  I have used a green baseplate for my design which measures 20x10 studs.

Please support this project and my other project Lego Art.  Also, please share it with friends and family as without this occurring, I will not be able to get 10,000 supporters and my dream of this becoming a Lego set will not become a reality.