Bridge to the Island of Magic 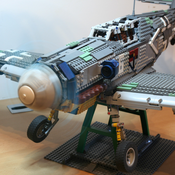 By PatrikBR
99 comments
The "Bridge to the Island of Magic" was born out of an intense, mystical dream, which became reality in these small pieces.
In the story I dreamed of, the island was like a treasure lost for centuries in the past, surrounded by a land of swamps, fog, and perdition, referred to in history books as "The Land of Nobody’s Soul".
Elders of the century first, took the location of the island with them to the tomb!
The island had a unique life, talking frogs and trees with fleshy trunks and bright colors, with flowers and big black thorns, blue crystal fruits, crystals with the power of death and healing!
An ancient Roman Bridge was built 2000 years ago to access the island, which today is a pilgrimage destination for the sick and infirm, who let themselves be healed by the wizards Myz and Syr Healingdijk, who rediscovered the island in the 14th century!
Myz prepares the cures, and Syr, together with Angel and SirMcAllen, brings the sick through the fog to the island.
in this set are:
Syr and Myz - ancient wizard couple
Angel - who protects the sick from the dangers of nobody's land during the journey to the island
SirMcAllen - Elf, the helper, helps with light through "The Land of Nobody’s Soul".
Dumpoppson - the sick child to be healed
Dumpopp - the child's father
Dumdog - Dumpoppson's eternal companion dog
I hope you enjoy this mystic moment and support this Idea !!
see ya in the past of our future!