Back to Mars: Terra Forming Platform

By MyBrick
12 comments
Please refer also to the main project Back to Mars - a classic space theme!

While the terra forming process of Mars was ongoing as planned, the astronauts were thinking about how to push on the geo engineering in order to create a 2nd homeworld out of this planet faster. The solution was to build up a huge mobile Terrra Forming Platform, called "TFP". Because their outpost became meanwhile self-demanding, no delay (due to deliveries from Earth) or a lack of parts was expected.

The TFP is based on two tracked drives interconnected by a base body. This base body consists of two main parts:
- front cabine (conning bridge, engine control and laser turret on top)
- back bone (with crane, drill and storage locations)

The TFP is supported by a small buggy which can scout the surroundings. 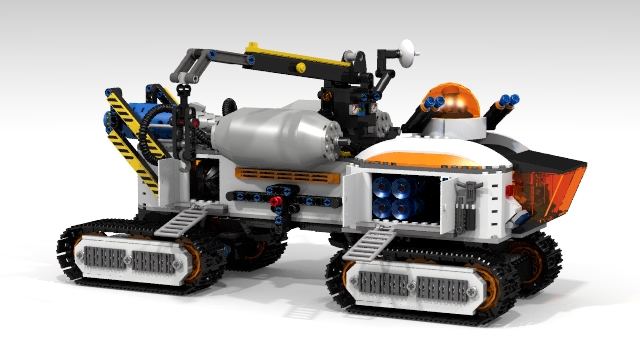 The conning bridge offers seats for the driver and the co-driver. Additonally two spare seats are available for the gunner and the engineer. This team is supported by 2 droids, which are handling the maintenance of the vehicle.

On top of the cabine a turret is available which is armed with 4 laser cannons to enable the TFP beeing self-defending in combat situations (but hopefully this is not necessary). The turret can be turned around by 360° and the cannons by 180°. An alternative usage of the turret is to observe the crane and drill during opertations; just turn around the turret and cannons by 180°.

The back bone offers internally storage capacity for up to 8 transport boxes (for goods, tools and plants). On its roof are several parts of the terra forming equipment placed: 2 storage tanks (for solids or liquids), the crane with bearing and a drill with release mechanism. 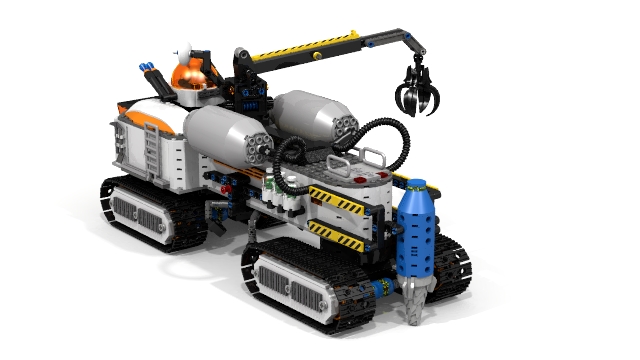 The crane can be moved from the front to the rear by sliding on its bearing and turned by 360°. Its boom can be lifted up and down by a gear box, keeping it also under load in place. The boom range can be enlarged by pulling out an extender.

Additionally the crane can be used in combination with a big hook (transportation of boxes, etc.), a big bucket (excavation) or an ice melter (extracting water). The bucket can be stored inside of the back bone. While the melter is keept in the front cabine , it can be used as engine add-on in order to increase its power.

The drill can be released by a mechansim down to the ground in oder to execute drilling and blasting work. If the drill is not used, it can be fixed in place by a bracket.

A hidden feature under the back bone are four semi-automated robot arms: they can be pulled out and are able to slide from the front to the back and from the right to the left. These arms are quite helpfull during planting and harvesting on ground level. 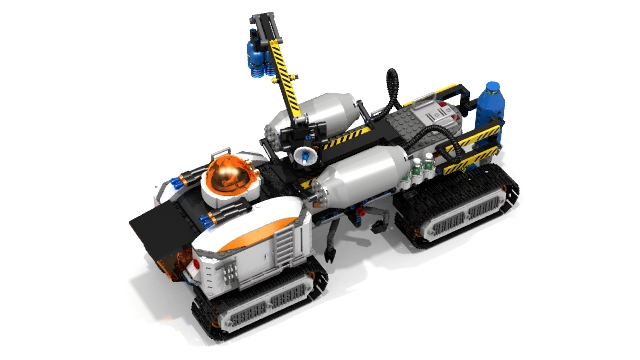 A very special feature of the TFP is its movement. It's not only possible to drive straight forward and backward or making a turn. Also its possbile to drive sidewise from the right to the left without changing the orientation of the vehicle (by turning around both tracked drives by 180°). Additionally it's possible to turn around each drives (turning around one by 180° and keeping the other one in position). Due to this capabilities the TFP can be controlled very accurately regardless of its huge size. 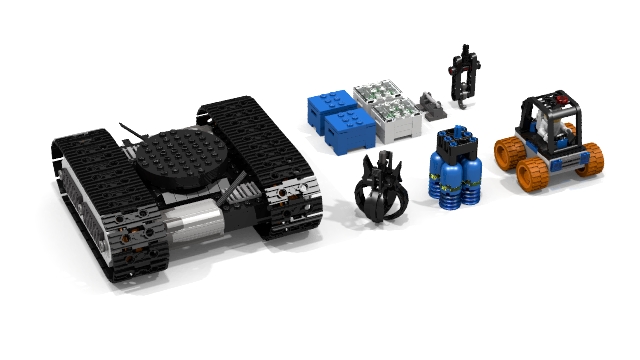 The TFP is Power Functions ready: optionally each of the tracked drives can be equiped with two M-motors, up to two IR-receivers can be placed at the back (between the release mechanism with some smaller modifications at the back, keeping the drill fully functional) and a battery box can be placed inside of the back bone. Already a setup with 2 motors and 1 receiver is able to control the vehicle, but the more complex movements require 4 motors and 2 receivers.