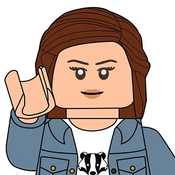 By ForBricksSake
38 comments
“You miss 100% of the sets you don’t support” -  Michael Scott.
The Dundies have been a part of The Office since the first 30 seconds of the pilot episode. There have been countless episodes and references throughout the series to the Dundies, and they played an emotional part in Michael Scott’s second last episode of Season 7, Episode 20 “Michael's Last Dundies” where his employees finally give him a real dundie for” World’s Best Boss”. The Dundies awards remained a fixture for the show, both in the opening credits and cleverly placed in the background of many scenes.
Fans have adored this piece of memorabilia, even celebrities like John Mayer, who allowed the show to use his song “Wonderwall” in season 3, “A Benihana Christmas” episode in exchange for a Dundie. As a huge fan of The Office myself, I would love to own a real dundie one day, but I will settle for a LEGO built one.
The piece count for this build is 315. The trophy is built more like a minifigure than a brick built figure. It has a secret compartment in the base with a homage to Michael’s office; hidden inside is a Michael Scott minifigure with his own mini dundie. If this would to become an official set I would hope for the set to have different tiles with the different awards, so you could customise it.
There are many iconic moments in this beloved series, but I felt like the Dundies Awards is such an iconic object of the show, it deserved to be recreated in LEGO. I am a huge, huge Office fan and hope that one of these many Office LEGO Idea Projects is selected as an official set.
Please help us get an OFFICIAL Office set and support this project!