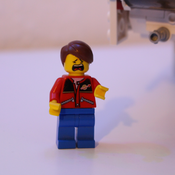 Thunderbird 2 is a heavyweight carrier craft from Gerry Anderson's iconic 1965 series: 'Thunderbirds'. The craft was designed to carry the various equipment 'International Rescue' used in their various operations.

This design is inspired by all the incarnations of the craft throughout the years, with shaping from the '65 version, sleekness of the '04 version, and stubbyness of the '15 version.

The finished set should include the craft itself, 4 legs, and a removable 'Pod' segment, seen in every incarnation of the craft (although not present in my design). It could also include a version of a pod vehicle, such as Thunderbird 4, or the Mole, as well as a minifigure version of Virgil Tracy (pilot of TB2).