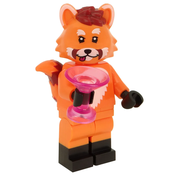 By fastlindyrick
67 comments
The Poco class starfighter is the mainstay of the Defiant Defense Force (DDF) in Brandon Sanderson’s novel Skyward.
Brandon Sanderson is one of the most popular contemporary fantasy and science fiction writers. Fifteen of Brandon's works, including Skyward, have appeared on the New York Times bestseller list. He has won two Hugo awards, and has broken the record for most-funded Kickstarter of all time, with $36 million raised to date.
Skyward is the first novel in Brandon's Cytoverse series. It is a young adult novel written from the perspective of Spensa (callsign Spin), a cadet in pilot training for the DDF. She is desperate to complete flight school, so she can aid in the fight against the Krell, who are determined to destroy humanity. Along the way, she must overcome a stigma against her family, her querulous flight leader Jorgen (callsign Jerkface), and an admiral who is determined to see Spensa fail.
Skyward and its sequels are notable for their inclusiveness, with characters representing a wide range of ethnicities and genders.
The Poco set features two minifigures (Spensa and Jorgen), a brick-built cleaning bot, and four brick-built Taynix slugs, including Spensa's pet Doomslug.
The Poco itself consists of 508 LEGO elements, including two printed or stickered parts with the label "DDF POCO" in block capitals. The ship has a hinged canopy, one front and two rear landing gears that are fully retractable during flight, a light lance turret, and an acclivity ring to enable flight.