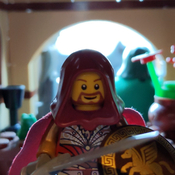 By KnightoftheForest39
28 comments
Thank you for having a closer look at my Wolfpack Great Forest Hideout. The Castle theme was always my favourite as a child growing up. It captured my imagination and led to me creating a huge and expansive world within my 7 year old mind. One of my favourite sub themes was the Wolfpack which this build is based upon.
I created this model as a base for the wonderful Wolfpack from the castle era. I always imagined that this motley crew would have bases all over the castle kingdom. I thought one of these bolt holes would be hidden away in the Great Forest. I wanted to create a set which was highly playable with lots of sections which could opened and explored. I have included trap doors and little nooks where 'donations' could be squirreled away. As this is the home of a 'wrongly' disgraced lord. I wanted to include a few comforts including a desk, chair and a comfortable bed! I also wanted to add an area where everyone would get together, feast and sing songs. That is why I have included the forest clearing area outside the main 'hideout' structure. This includes a central firepit and trees.
I wanted to give the wolves a place where they felt safe, to feast, play music as well as hide their ill-gotten gains.
In this set I have included four minifigures. The wrongly disgraced lord who has had to flee from the Castle Kingdom. With him is his sister, younger brother and loyal but elderly tutor.
I believe this would make a great Lego set as it would be highly playable and gives another dimension to the Wolves world.