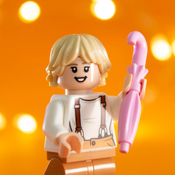 By CozyBricks
41 comments
Let’s face it Hilda is probably my favorite show out there. The stunning visuals, color design, characters and let’s not forget the amazing story about a young girl going on crazy adventures with her friends. If you’re a massive fan you might even have read the comics by Luke Pearson. I will also include some bits that didn’t make it into the show just for you.
This set will be both playable and displayable for all fans of the show. Maybe you are longing to go on another adventure with Hilda after watching all the episodes. Or maybe you just want to go back to that nostalgic feeling you had first time watching the show. This set has got something for both.
Minifigures:
This set will include 3 minifigures.
·     Hilda (will include a radio, sketchbook with troll drawing and pencil)
·     Twig
·     The woodman (includes a book on giants)
·     A troll big fig???
Builds:
This set will have 4 individual builds. The first and most obvious build would be the trollrock one of the most iconic creatures in Hilda. The troll would come with a bell that you can put around their nose. But the troll rock won’t be alone they will go accompanied by a buildable woff that Hilda can ride.
Next to these 2 buildable characters we will have 2 wilderness builds. One being some pine trees with elves houses underneath. Sadly, elves would be a bit small to make into minifigures so this will have to do, you wouldn’t have been able to see them anyway given you haven’t signed the right paperwork. however, we can add the rabbits that they ride into battle!!!
The other build will feature something not seen in the show. The tent that Hilda sleeps in on rainy nights.
Playability features:
The troll build would be able to turn from stone back into a troll! And the rabbits would have a launch feature so they can jump.
My original idea was to have 2 sets one wilderness adventures set and one city adventures set. The other set would have included characters such as: Frida, David, Hilda’s mom (Johanna), The great raven and The librarian (Kaisa). There is so much Lego set potential in this show. I mean you could make the underwater bell with the kraken or the lint worm on her island. The list goes on.