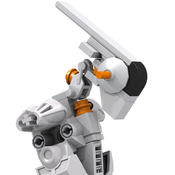 -- THE MOVIE --
By the early 22nd century, Mankind had colonized many worlds.
Faster than light travel was made possible by harvesting exotic matter
from the eggs of the largest species mankind has ever seen.
Those that take part in the hunt are mostly involuntary labor.

The movie is a short movie teaser. It met such success that it has been decided to make it a long length movie.

The movie is so rich that there is a lot to do. I decided to start focusing on vehicles.

Vehicles
In the teaser, 2 vehicles are involved:

There is a great playability potential: In the movie, the hunter ship is equiped with a arrow weapon to shout at leviathans. The lego ship also fires powerfull lego arrows !

Minifigures
Not much fantaisy on Minifigures, they all dress the same with a unifor space suite and helmet in red orange color.

Creatures
In the teaser, we can see 2 creatures:

What else?
The factory mother ship hangar could also be modelized but hardly as a minifigure scale set. The full mothership? Maybe at a microscale...

We'll be waiting for additonal teasers or pics to update the project. Keep in mind that all you see here is a Work In Progress and allready has evolved.

What I liked in the movie is its futuristic and rather dirty and heavy dramatic atmosphere. The scenario is intriguing and original. I like its Dune and Starwars Influences.
I think the ships designs are amazing. I can't wait for more !

Thank you for supporting this Lego Ideas Project. As an appetizer, get the Scouts and modular docks building instructions and LDD file at: http://bit.ly/1E9lkVh​

And of course, follow Ruairi Robinson, the film maker.