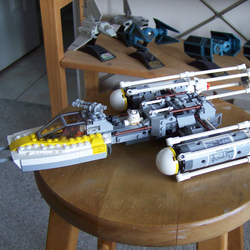 On September 13th, 1999, the Earth’s Moon was blasted out of orbit due to the massive explosion of Waste Disposal Area Number 2 on the Moon’s “dark side”.  The 311 crew members (inhabitants) of Moonbase Alpha were left to survive on their own as the Moon rocketed into the unknown.  As part of the many support vehicles on Alpha was a fleet of Eagle Transporter interplanetary spacecraft that were utilized for transport, reconnaissance, rescue, defense and a plethora of other duties in deep space.

The Eagle Transporter was of a modular design, consisting of a two-person command module in the nose, two modules with manoeuvring thrusters and landing pads and an interchangeable pod in-between.   The nose and aft sections were held together by a strong, overhead latticework structure under which the various pods were “hung” from.  A number of pods were developed, consisting of a passenger pod, reconnaissance pod, rescue, freighter, laboratory and others, plus interchangeable cranes, winches and other equipment.  The Eagle was powered by four fusion rockets in the aft module and some were armed with a powerful laser.

“Space: 1999” was Gerry Anderson’s third live-action TV Series and one of his most successful, produced between 1974 and 1976, with a total of 48 episodes over two seasons.  It was originally developed as a second season of “UFO” as “UFO: 1999” that took place on a Moonbase some twenty years after the original series, but morphed into its own show.  “Space: 1999” starred then husband-and-wife Martin Landau and Barbara Bain, and was noted for its detailed sets and spectacular special effects.  One of the highlights of the show was the Eagle Transporter.

I have been enamoured with the Eagle ever since I first saw the spacecraft in “Space: 1999” in 1975 as an 11-yr-old.  I loved the functionality and the modular design that made it seem real.  The Eagle was designed by Special Effects Supervisor Brian Johnson, and in the back-story was a Bird-of-Prey series craft, like the Hawk and Swift vessels seen in later episodes.

Like my other designs, I used Lego Digital Designer to fabricate this model of Eagle One, and I am indebted to Craig Norris for his hard work on the renderings.  My intent was to make the model Minifig scale for play value, and not just make a display model that would be built and left on the shelf.  Thus, this potential LEGO Ideas model has many play features that make it a play-able LEGO set as well.  Obviously, this meant having interiors for the Minifigs to be in and, of course, Minifigs themselves, of which five are included.  When designing the model I imagined what I, as an 11-yr-old, would have wanted to have included.  The result is what you see here.

First, and foremost, I wanted Eagle One to be fully modular, and thus the Pod is removable from the main Eagle structure.  Rather than attach it to the overhead spine, four latches made from Technic parts are fitted to the Pod – two in the front and two in the rear.  These slide into Technic bricks in the front and rear modules, and are attached to the vertical thrusters on the underside of the Pod so as to camouflage them (see illustration).  Thus, pushing the vertical thrusters moves the latches into position.  This allows for play to be accomplished with the Eagle craft “and” the Pod separately.  I also made the command module nose section detachable.  This design element was showcased in the episode “Dragon’s Domain”, and, again, Technic bricks are used as attachments.  The nose itself has a removable roof to access the interior for two Eagle pilots, and includes controls and forward windows.

This removable roof feature was also incorporated into the Pod as well, and, this also features a full interior.  For the best play value, I chose the Reconnaissance Pod as this features both seating in the rear for four Minifigs and a computer in front, where the Alpha Minifigs can investigate new planets and other phenomena.  Both side doors can open.  Obviously, this allows all five Moonbase Alpha Minfigs to be placed in Eagle One.  To simplify the design, the sliding door has been omitted in place of a clamshell system of upper and lower doors.  A series of steps on the lower section replaces the stairway that would “magically” appear on the Eagle in the TV Show once landed.  As the dark sections on the top of the Pod are actually windows, I elected to put real windows there rather than just black bricks.

In terms of the Minifigs, I have included five.  These consist of Commander John Koenig, Doctor Helena Russell, Professor Victor Bergman, Chief Eagle Pilot Alan Carter and Main Mission Controller Paul Morrow.  I felt these were the most important characters in “Space: 1999”.  In creating the look of the Minifigs, I chose to use the First Season uniforms and characters, emulating the Moonbase Alpha uniforms designed by Rudi Gernreich.  The exception is Alan Carter, whom I have put into the Eagle astronaut suit, with helmet.

The final result is a large model, with an overall length of 61.5 cm (24 in) and a brick count of 1100 – including the five Minifigs.  This is the result of it being of “Minifig-Scale”.  However, despite this, Eagle One is still much smaller than actual scale, and would be much larger if properly scaled.

One final note.  My intention when developing Eagle One was not to fabricate a 100% authentic reproduction of the Eagle Transporter from “Space: 1999”.  Rather, Eagle One is designed as a play set to capture both the spirit and essence of this wonderful craft.  This allows the LEGO model to be played with, and yet also to be displayed as an homage to this British Gerry Anderson-developed Sci-Fi TV Show and the fantastic designs therein.

Please “share” this design so as many followers as possible can view this concept.  Any comments or feedback is welcome.  Thank you.