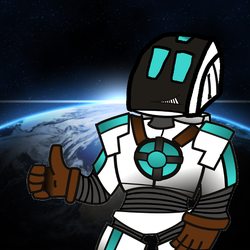 Its cockpit was elongated in a similar vein to that of the Lambda-class T-4a shuttle.The internal troop bay was opened by doors on each side that folded up into the ship upon landing. It possessed two large wings, like the LAAT, and two smaller wings on the top.

-Use the dropship to deploy Stormtroopers in fight !

-Detroy the Rebels with 4 weapons !

I have made that model on Lego Digital Designer !