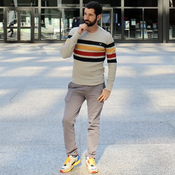 Hi there!
This is my first contribution to Lego Ideas.
Journey with me to the jungle of the Yucatan and explore this ancient Maya Palace.
Fun fact: scholars only use the word 'Mayan' when referring to the language, for all other means, Maya is the correct word and there is no distinction between singular or plural, i.e. one Maya and many Maya.
Beginning.
The inspiration comes from my last trip to my homeland, Mexico, when I visited the Archeological Site of Uxmal, a monumental and breathtaking ancient city constructed by the Maya around 850 A.D.
Of all the buildings on this site, the one that excited me the most was the 'Governor's Palace'. An imposing construction hundreds of metres long that sits on a perpendicular axis to its surrounding buildings, making it stand out from the rest of the complex.
This colosal palace was built on top of a man made platform using local stone placed by hand.
From this magnificent edifice, the idea emerged.
Design.
I selected the sand stone colour bricks to represent the lime stone used in the real building, and began with the construction (creation) of the doorways. Once the doorways were completed, I began to assemble the main bodies of the build.
Starting with the central and most dominant body of the composition, featuring five doorways, the build extends to both sides by implementing two wings with two doorways each, connected by two grand gateways (used to cross the building in a perpendicular axis).
This arrangement resembles the existing real palace whilst keeping symmetry, symbolism and balance.
I decided to introduce a darker shade of sand stone to add some contrast and build the cornice on top, using geometrical patterns resembling ancient Maya Architecture, then I moved onto the platform supporting the building, keeping this one simple with few decorative elements.
Features.
The Maya did not have the concept of a traditional arch, therefore they used a more primitive method of displacing load by allocating one stone on top of the other, slightly offsetting them until forming a 'corbel arch'. I recreated this effect in the two grand gateways built with inverted stud lego techniques to form the angles.
The central staircase leads to the ground level where I have placed a two headed jaguar throne replicating the one found on the archeological site. Similarly to the gateways, the jaguar is also constructed using connecting studs in different directions.
And last but not least, I chose to add a tree to the composition as a symbolic representation of the jungle which surrounds the city. It is also a reference to the initial hand made drawings by the first explorers who re-discovered the site.
Play.
From the beginning, I felt it was essential for the set to not only include artistic elements of Maya Architecture, but to also be fun to play with.
Therefore, when choosing the scale of the set I made sure that Minifigures could be used to interact with the build, and not just that, the set is designed in such way that can be easily constructed and separated to create different combinations and scenarios for your next jungle adventure.
Technical.
3D model created using Lego BrickLink Studio 2.22.12(1)
2,268 pieces
Overall dimensions are H: 26.5 x W: 76.5 x D: 15.5 cms.
Final Note.
To view the original creation using real lego pieces, please visit my Instagram account.
I will also include videos and more content.
Hope you enjoy this set, and thank you for your support!
Yours sincerely,
Antonio