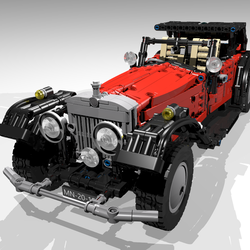 An authentic recreation with Lego Technic of a Rolls-Royce Phantom II Coupe from 1934.

It is RC operated with working engine, steering wheel and has back suspension. The trunk and "suicide doors" can open and the engine bonnet will open up in the original fashion to show the engine. I tried to make it as original as possible to the real car.

My goal was not to create another "super-car" but an original model that is quite different to the normal Lego cars and I think it succeeded well. I would love to see this model become a real Lego Technic model!

Hope you will support this idea and get it released as an official Lego set.