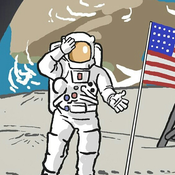 The Hermes spacecraft, the result of a decade-long collaboration between NASA, ESA, Roscosmos, JAXA and ISRO, is the manned transport spacecraft of the Ares Program, built to transport astronauts from Earth orbit to Mars and vice versa . According to astrophysicist Neil deGrasse Tyson, it is "the most complex and expensive object ever built".

Hermes was built in low Earth orbit using the SpaceX space station as a construction platform, with individual parts transported to the station piece by piece. The process was tedious, but its results established a new era of space travel.

Hermes was completed and flew his first mission, Ares I, in 2029. Hermes is currently commissioned for six missions in total, from Ares I to Ares VI (the latter a later addition to the Ares program); later, it is scheduled to be reused as the new International Space Station, to be replaced by the Olympus spacecraft for future Ares missions from Ares VII onwards.

Before departure, crews fly to Hermes in orbit on a transport ferry.

The electric power in Hermes is provided by its nuclear reactor on board, as well as its solar panels. The ship's ion propulsion system uses argon and electrical energy to produce positive ions and propel the ship forward in continuous acceleration. While on board, the rotating gravity segment of Hermes generates a degree of artificial gravity that allows astronauts the ease of mobility and maintain sufficient muscle tone in space, protecting them from the effects of long-term weightlessness. Hermes is also equipped with state-of-the-art radiation protection to isolate the ship from solar and cosmic radiation (which can cause cell damage and cancer) as well as a number of advanced life support systems such as its oxygenator and water recovery processors that allow it to maintain human life for prolonged periods.

The construction includes two spacesuits and the six members of the crew: