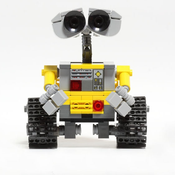 I never forget the scene I went to my first movie - Star Wars when I was five, then I became a Star Wars fan until now, of course.

So excited about the new Star Wars movie this year. BB-8 is the most impressive robot character in it. It looks like the enhanced version of R2-D2. The rolling body makes it move faster and more lovely.

I  build the head of BB-8 by the way of my last LEGO IDEAS project "Mini Eve",and finished it's spherical body by a large number of slopes.The result is satisfied.

Hope you like my version of LEGO BB-8, too. Support it and share it, thank you very much.