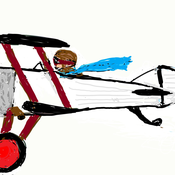 All the wonderful fairground models (10244 Fairground Mixer, 10257 Carousel, 10235 Carousel, 10247 Ferris Wheel, 10196 Carousel) cry out for motorisation but the question is where do you put the battery. I found a motorisation idea for the Winter Fair Carousel on line but was concerned the the power pack was stored inside a large brick housing.

I took my inspiration from colourful converted military and commercial vehicles used to provide the power for fairground rides.  These feature large diesel generators on the back of  heavy trucks and are parked near the rides.

My model features a rechargeable battery housed to look like the generators.  The carousel is simply switched on and off by pressing the roof tiles in the manner used on Lego Trains. The desired speed is pre-set, in my case its maximum as I used a medium motor and a worm drive for motorisation.

To add to the flexibility of application I made alternative advertising hoarding stickers to go on the side of the trailer and wagon. These are shown in the photos, my idea would be that Lego would sell the bare truck and trailer with alternative stickers for all their current and past fairground models.

My other stickers are “Winter Traveling Circus” and registration plates taken from the Lego Freight Terminal Set which also provided the trailers wheel.  Power Distribution panel is a common train control tile.

The Truck is designed to fit in with other “Winter Holiday” vehicles and fits very nicely in our Christmas Lego scene. Visiting kids loved being able to switch the carousel on and off by pressing the top of the truck.

My first submission featured pictures of the carousel in the background, at Legos's request I have removed that photograph.  I have  substituted a power functions motor and cable ramp being crossed by minifigures to illustrate the idea of the trucks use.