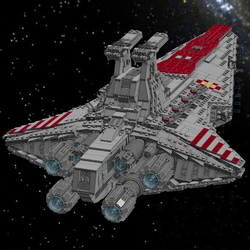 My LEGO "Ultimate Collector Series" Venator from Star Wars that I made is my masterpiece. It is over 28" Long x 14" Wide x 10.5" Tall & Weighs over 6 lbs. It is more than 3800 pieces, with a mini Republic Frigate that can fit inside the Shuttle Bay!
About the inside design I used the rubber DAMPER 2M – Black (4198367) pieces to hold the bottom plates up.
P.S. The reason why there are so many lever cannons on the sides is to represent the 52 point-defense turbo lasers that are mentioned in the original specs! (I was trying to custom design the black antenna pieces to look like smaller Dual Laser guns in the turrets, but gave up on it b/c I did not have a good way to mass produce them & they were not official LEGO pieces)