Castle in the Sky - Laputian Robot 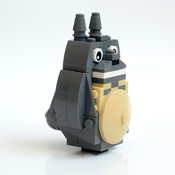 In 1986 a legend was born - world respected Japanese anime director Hayao Miyazaki and his newborn Studio Ghibli released a film titled "Castle in the Sky" (天空の城ラピュタ Tenkū no Shiro Rapyuta), which would go on to bring generations of children and adults alike pure joy through awe-inspiring traditional hand-drawn animation techniques, emboldened characters with pure hearts and open minds, and beautiful music provided by the one and only Joe Hisaishi.

Now, on the eve of the film's 30th anniversary,  your chance to own a strikingly detailed Laputian Robot built entirely from LEGO bricks has arrived!  Standing at 15" tall and built from over 900 pieces, this guardian robot features 32 moveable joints, a powerful physique, and a face that strikes a balance between power and delicacy.  All it needs now is for you to awaken it!  As a bonus, I've included minifigures of Pazu and Sheeta, the determined heroes of the film.

These legendary guardians of the sky were built by an ancient civilization to protect its floating castles and inhabitants.  As the civilization fell into decay, the robots fell dormant while the castles all but disappeared into mystery and legend.  One night a boy named Pazu finds a mysterious girl floating down from the sky, and the two embark on an adventure together to uncover the truth behind the castle and people of past times.

Thank you for your support, and please share with your friends, so we can mark Castle in the Sky's 30th anniversary with style!