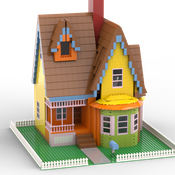 This model is of the "UP" House. It is from a Pixar film made in 2009 called "UP." In the movie, there is an older man who turns his house into a floating ship with balloons because he is afraid he will have to live in a retirement community.
The "UP" house (as I like to call it) is in many different colors. It is based on a real-life house that was recently sold. Pixar used the house to convey different colors to enhance the image in contrast to a floating house with mere balloons.
in addition, I carefully designed the structure inside the house to hold the various roofs that you see in the model. The toughest part of the model was having different size roofs adjoin together. I managed to do it with a great deal of effort and a great deal of diligence.
Just as in the movie, I used the same colors as the real-life "UP" house in contrast with Pixar's version.
I would also like to mention that where the three windows are in front of the house it was very difficult to make a round front to contain those windows properly in the Lego set.
Also, the reason I built it was because I love the movie. The movie reminded me of the relationship I have with my significant other. In the movie at the beginning, there is a five-minute montage of a couple going through rough times together throughout their lives. They met each other when they were younger because they were both fascinated by exploration. The little girl in the movie used the "UP" house as a base for her exploration and the boy in the movie was the first and only member of her group. I found it breathtaking and invigorating.
I decided to go to work on the "UP" house to commemorate their relationship and immortalize the importance of everyone's relationships, and also as a beacon of hope for people everywhere to work together and accept each other's differences.
Furthermore, I was also inspired by the exploration aspect of the "UP" house. It manages to make your dreams come true no matter what. That is exactly what I want to do. What the "UP" house did. Make my dreams come true along with millions of other individuals in the world and unite them with a smile.
I started building the house with the roofs and worked my way down. I tried it before but failed because I was working on the porch first. That was a big mistake as building the porch last was the key to its foundation.
Now that you know a little about the Pixar film's "UP" house, I would appreciate it if you would support my dream of making it into a reality just as in the film.
I would like to thank any and all my supporters of this "UP" house and promise that I will continue to build marvelous creations throughout my life. I have a fondness for Lego and promise to give the world something back through Ole Kirk Kristiansen's initial idea of giving toys to wonderful children all over the world. He had the idea of exploring innovative toys just as the "UP" house was able to explore the world with its wonderful balloons.
Here is a link to a short part of the film if you haven't seen it without spoilers.
Finally, I believe that this would be a great Lego set because it truly is fun to create. Also, the genius of the color combination really brings out the greatness of what Lego bricks can create. I think that this "UP" house is truly an immortal piece of Pixar, and will help us explore our inner imagination just as the movie did.