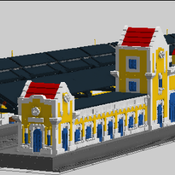 Up until 2004, Barreiro train station was the main railway station serving Lisbon for destinations towards the south of Portugal. Unfortunately today it is derelict and falling apart.

This model is inspired in it and tries to recreate the classic environment at Barreiro station in its glory days when people would cross the Tagus River to catch a train towards sunny Algarve and Alentejo regions or to nearby Setubal.

The building itself dates back from 1884 and owns a mix between arabic, late gothic and classic architectural styles, also with some sea related details that evidence the nearby presence of the river Tagus and evokes the fact that it was the connecting train station before/after the mandatory river crossing. In fact, the train station sits on a landfilled area that was once taken from the river.

The model has all the classic train station details such as the waiting seats, the clocks, the train lines and buffer ends, the departures and arrivals boards. A passenger waiting here for its train could have bought his ticket inside on the tickets offices and then wait for his train to arrive either inside, at the platforms or on the street outside.

A singular steel and glass shed allows natural light to enter the covered platform area while also protects the passengers from the stormy weather and once allowed the smoke of the old steam locomotives to fly away. A more relaxed passenger could just sit by and enjoy the views towards the river and the city of Lisbon. Others would also be amused with the many train maneuvers being done by the railway workers and the intense movement of rail cars and carriages and locomotives rolling in and out of the station, for in its glory days this station was not only the main station south of the Tagus river but also the main railway center of all diesel powered trains in Portugal.

Just sit back and try to imagine all the life that this station once had. This set would be a fantastic piece to anyone's train collection, especially considering the historical value of the building itself, that still exists, although its future is sadly uncertain.