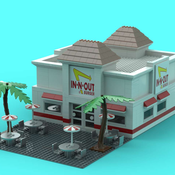 Are you a Nintendo Fan? Than the Nintendo DS Lite is a great way of modeling that you are a Nintendo fan! The set comes with similar features such as the flip open ability. In this set, you have the chance to imagine having an Nintendo DS Lite but in the exquisite Lego version. The set also has red back covering on the flip case and the overall set include 149 pieces.