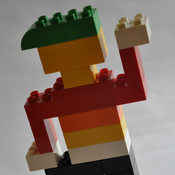 By gunbiagg
44 comments
Released in 1989 the Spy-Track I (6985), this Space Police vehicle with a futuristic off-road style deserved a re-edition.
So here's my vision of what would be the Spy-Track II.
The ingenious pendulum system to steer the machine was the starting point of the project.
The design of its 4 huge wheels made it a little bigger than the original and set the side of the vehicle.
The blue and black code is retained as well as the superb trans red cockpit.
Designed for one Space Police minifigure, he can however carry 2 cells and unload them with its articulated arm which was the second important point of the project.
Built with 1260 bricks, the Spy-Track II is 34 studs long and 23 wide.
I'm sure the playability and "re-playability" of my Spy-Track II make it a great LEGO set as the Spy Track I was a great LEGO set too.
Thanks in advance!