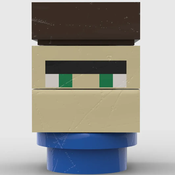 By SuperSpruce101
27 comments
This model is based off James Cameron's 2009 blockbuster AVATAR. My design depicts a battle between the native Na'vi and a human operated AMP mech. The battle takes place on the magical forests of Pandora, among exotic flora and fauna. The Na'vi have mastered their environment, and can be seen utilising the trees for a height advantage over their formidable opponent. AVATAR pioneered modern digital effects, which were in large part used to visualize the vast, alien and beautiful world of Pandora, I was compelled to recreate the magical landscape in LEGO, because I believe with modern pieces, the LEGO system is now well-equipped to capture the detail seen in the film. AVATAR has recently resurfaced, with the announcement of a new Ubisoft game, AVATAR: Frontiers of Pandora. The set is designed to be a display piece much like the new LEGO dioramas.