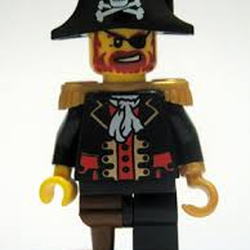 This idea is based on the Tortuga scene from Pirates of the Caribbean The Curse of the Black Pearl.  It includes 5 Minifigures, Soldier boat, Pig area and Tavern.  The Minifigures are:  Captain Jack Sparrow, Mr Joshamee Gibbs, Will Turner, one of Norrington's soldiers, and a Bartender.  Some features are that the Tavern is de-tachable from the Pig area, the boat has a firing cannon (I couldn't find the cannon piece in LDD), and the Pig area has a water-spilling feature where you place the round pieces in the gap and pull the lever so they fall onto who-ever's there.  It also has room for a Pig, and carrots can be placed into the small backpack/bucket pieces.  The Tavern has an opening door with seats, bottles and mugs inside.  Lego could make it look better, I just made a basic model.  I know in the film there aren't any soldiers, but it added to the play features.  Thanks for looking and I hope you like the idea as much as I do and support.