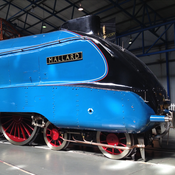 All aboard! This is my first ever project on lego ideas: The Argenta Express.

This model isn't based on any real life steam locomotive, and the name Argenta express is also made up (Argenta by the way is a latin name meaning silver). The train is built using 303 pieces and is fully equipped with power functions (the motorised train wheels, the IR receiver and the battery box).

On the front of the model you may have noticed 2 1x1 yellow tiles that both read '4' to make up '44'. This corresponds to my username Studmaster44, and I will probably do the same thing on any future models I do.

I started to design this set for fun when I realised that almost every lego steam train to ever be released wasn't by default motorised when people bought the set. This therefore meant that the buyer would have to go to the trouble of buying the extra power functions to build into their train so it could be either driven by remote control or simply be able to go around lego track electronically. So, I thought that I would build my own motorised steam engine, and the Argenta Express was born. At the time I didn't even know lego ideas existed, but as soon as I found out, I rushed to the website to create my own account, and uploaded my model.

A lot of the space in the locomotive is occupied (the boiler's full of wires and contains the IR receiver, and the tender holds the battery box) but don't worry; there's plenty of space for a mini figure to sit down in the cabin. It's not a traditional interior, but there you go. The roof of that area is only held on by 2 studs, so it's very easy to detach and attach it on and off the train. The tender isn't as detailed as other parts of the model, but it's still home to a very crucial part of the train overall; the L and the R. These two letters are printed on pieces that are the same in shape as the '4' pieces, and are on both sides of the tender. The initials simply stand for 'Lego Railway'.

Thanks for having a look at the Argenta Express, my first ever lego ideas model! I would really appreciate it if you could support,