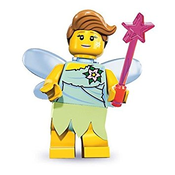 Let yourself get carried away by the magic of this Christmas fairy tale with a LEGO play set! Help Clara (or Marie) and the nutcracker prince against the mouse king, then travel through the snowy winterland, guided by the snowflakes, all the way to the wonderful Land of Sweets, home of the prince and the Sugar Plum Fairy.

This is my interpretation of The Nutcracker. I kept the size and part count to a minumum to make it affordable, but cared to include elements of all scenes to make it possible to recreate the whole story with just one set, which would include:

Among the accesories you can find a tiara for Clara, in this version a gift from the Sugar Plum Fairy. She crowns Clara as princess in reward for breaking the nutcracker prince's curse. When Clara wakes up back home, she believes it was all only a dream, but then finds what looks like a book with the title The Nutcracker. Clara opens it and discovers inside the same tiara she wore in the Land of Sweets.

It would be great to get Herr Drosselmeier and the Mouse King too but that would make the set much more expensive.

I think it is time The Nutcracker gets a cool playset with more play possibilities; as far as I know, there are mostly only paper doll sets and some collectible wooden sets in the market. I would have loved to own something like this as a girl and I am sure children around the world would enjoy playing with this set if it were produced and sold.

This would make a great LEGO Ideas set because:

Is The Nutcracker so well-known around the world to make this set worth producing? The story might not be such well-known in some parts of the world as other fairy tales are, but this is nothing a little marketing cannot fix. Besides in major toy stores, it could also be sold directly in opera houses and theatres featuring The Nutcracker (it would be a great fundraiser for ballet companies and schools).

Thanks for stopping by! Please support and help spread this idea if you like it to make it happen, children cannot support this on their own.

Picture credit: Many thanks to freepik.com for the bakery and the ice cream poster artwork.