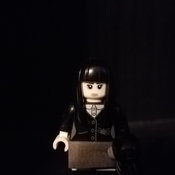 Batman needs to stop Anarky from putting a bomb in Gotham city. Find Anarky's base and take out his anarchist and stop Anarky and watch out for his taser stick.

My model is the inside of the church Anarky used in the Batman Arkham Origin as his base of operation. I built it because I love DC Legos so I decided to make my first set from a Batman game and I like the character Anarky so this is what I decided to make. It will make a good set because it has a DC villain that has never came out yet, and if a Anarky minifigures was made then I would be the first one in line at the store to buy it.