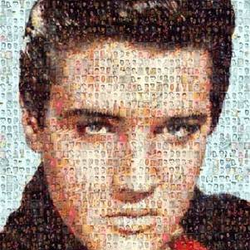 Here is my version of Elvis Presley's home in Memphis, Tennessee : Graceland !
Graceland is the second most visited house in the US, right after the White House.
Elvis remains to this day the biggest disc seller as a solo artist, thus I think he may deserve to have his own Lego set as a tribute for what he brought to the Music world, and to the international culture.

This model represents an artistic vision of Graceland. I made my researches and tried to mix the actual first floor as we can see it on today's tour of the mansion, with the second floor as it could be (since we have no or almost no picture of the upstairs, and we don't have any acces to this second floor during the tour) when Elvis was still alive (and possibly still is since it hasn't been touched).

The model is composed of approximately 4.500 pieces.

I could add some secondary sets to come with the mansion, such as the swimming pool and the Meditation garden, the Racketball court, the car park, the RC car building, the basement or the main gates for example. Those different sets could even be interconnectable in order to make a lego-size Graceland property !