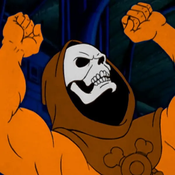 By Sebby_Skeleton
6 comments
This LEGO build is a re-creation of the graveyard that was shown in Walt Disney's first-ever, "Silly Symphony," short, named, "The Skeleton Dance," created in 1929. I built this set because it is one of the first animation shorts, animated in a beautiful dark and creepy style which portrays four skeletons dancing with each other on a dark night in a spooky graveyard, after all four of them emerge from the back of a tombstone. Not only that, but this set spawned seventy-four other, "Silly Symphony," shorts, many of which one Oscars for the talented design and style of these very creative shorts. I believe that this would make a great LEGO set because it is very unique with the colors of the bricks only being dark gray, black, and light gray bricks making it look exactly like the original animation. It has over two-hundred and fifty bricks and four skeleton mini-figures, one of which has two bones in which one seen he mimics a xylophone melody after using them on another skeleton's rib cage, and two black spiders and one black bat. This is a spooky set made just in time for a spooky season.
Shout-out to ALIEN ATTACKS for helping me make this build a reality.