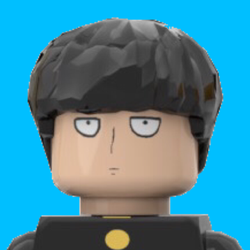 Based off the hit Sanrio character and Netflix series, Aggretsuko is a Japanese animated musical-comedy about a Red Panda named Retsuko working as an accountant at a Japanese trading firm. Every day she faces constant frustration from pushy superiors and annoying co-workers. As a way to cope with those and other problems, she resorts to singing Death Metal karaoke!

My set is based off one of the iconic settings of the series: Retsuko's workspace in the Accounting office. I tried to capture as much detail and color from the setting as I could. I examined multiple frames of the show showing off different angles of Retsuko's workspace and the surrounding area to make sure I could capture everything possible. The area features 4 desks w/ chairs (including Retsuko and her closest co-workers Fenneko and Haida's desks) with computers w/ keyboards, paperwork/letters, and various desk trinkets. Included along the back wall of the model are background details such as a shelving unit, two photocopiers, and paper on the wall.

Also included with my set are 3 minifigures based off characters from the show! (All are still a work in progress):

Aggretsuko is hands down one of my favorite shows currently airing. With two seasons already streaming and a third one coming next year, I am definitely not alone in loving this show. I, and hopefully many other Aggretsuko fans, would love to see part of the series and characters as an official LEGO set. Thanks for viewing and reading about my project. I hope you consider supporting!