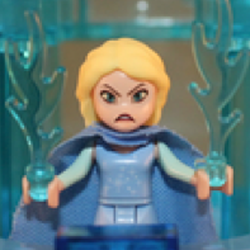 This set is based on a scene cut from Frozen described to me by my children.

In revenge for his humiliation, the Count of Wesselton has used ice fracture mining to drive the Yeti across the border where they have taken up residence in the abandoned Ice Palace.  The Yeti's power gradually grows and a creeping cold descends the North Mountain infecting Arendelle.

In Arendelle, Elsa and Anna are reconnecting, but Elsa feels something stirring on the North Mountain and her own powers begin to wane.  Summer cools and creeps up the fjord. The town can not survive another crop failure. With her powers failing, Elsa must visit the dungeons and enter a Faustian bargain with Prince Hans, Arendale's greatest military leader, who still commands the loyalty of the military regardless of his incarceration and murderous plans for Elsa and Anna.

Hans betrays Arendelle and joins with Wesselton.  He sends word that his forces are wiped out by the Yeti.  Anna, Elsa, Kristoff and Olaf are forced to travel to the mountain creating an army of ice monsters along the way.  Olaf takes a darker turn as he takes command of the army of ice monsters.
In the Battle of the North Mountain, the empowered Yeti and Elsa fight an epic battle freezing the earth's crust and crumbling the ice palace.  The cold cracks the earth, opening the Hollow Earth and attracting the cthulhu from the other ends of the Earth and the other end of time!  Setting the scene for Frozen 2: At the Mountains of Madness.
_____________________________________________________________
This whole project has been a really fun daddy/daughter project.  My girls, 4 and 8, both love building things.  We have a Lego city in the basement that they are constantly remodeling.  A combination of a trip to Disney World, the Frozen movie and their love of Lego made this project a must do.  Along the way to the Yeti started taking on a bigger and bigger role.
As we got started, I couldn't help but notice the other amazing Frozen set on Lego Ideas site! Wow, they are well beyond my capabilities and budget!  In fact, while I admire this set it is HUGE and I didn't see how Lego could actually build it.  My girls really wanted a set with high playability, but that still had all the elements of Elsa's palace.
Girls Advice and Contributions
My girls had a huge part in designing this set.  The 4 year old has an encyclopedic knowledge of Frozen and Batman.  She pointed out that the palace didn't have a bed, but she also insisted on the Yeti.
My girls designed the following parts.
Key Elements
We watched the scenes where Anna comes to the ice palace several times.  We finally decided these were the key elements that had to be there.
Wasn't able to do
We really wanted to do the purple fractals in the floor of the palace, but we could never work out how to do this so the purple snowflakes ended up in the fountain.
Playability
Room for kid's hands.  Originally the 2nd floor was much bigger, but my kids couldn't get their hands into the first floor, so we tore it down and started again.  Note:  4 year olds don't really understand the concept that it will be rebuilt
Open Space.  The girls like to add on and make up stories, so I left room in the front for them to build and change the set.
Trans-Blue is Hard to Find
I ended up using Bricklink to get lots of older parts.  Trans-light blue, the original color used is hard to find, so I fell back on many other shades of blue and even used light violet and white.  Quite the learning experience.  Lego actually had an Ice Palace back with their Belville sets in 2006.  The sets were:
Lego 5850 The Royal Crystal Palace
Lego 7577-1: Winter Wonder Palace
Baseplate
The ice themed baseplate popped up in my research.  It was used in the two sets mentioned above. Its huge at 15 inches x 15 inches!  The original sets were much simpler with big lame pre-made pieces.
Minifigs
Elsa comes mainly from the Cinderella carriage set.  The "magic dust" on her dress looks like snow flakes. Her arms come from one of the dolls in the 2012 Advent Calendar.  The same arms are on one of the nurses in the Animal Hospital set.  I also learned that mini-doll arms do come off!
Elsa is all original parts.  The hair is Rapuzel's from a polybag set.
Anna uses Mia's red hair with a "skunk" stripe.  The top is a painted Magician from a Friends set, which was already mostly black.  The dress is from a mom and I had to paint the original red.  Its already chipped from heavy play.
More Information
I'll include more pictures and a parts list over on the Flickr site.  Its not all the parts, just the ones I bought off Bricklink.
https://www.flickr.com/photos/83927084@N00/sets/72157645558841457/
38