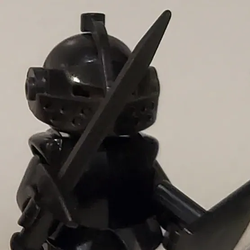 “Nicknamed the White Egret, Himeji Castle soars above the town of Himeji. Known today for its awe-inspiring size and ninja-defying layout, the castle once held the significant responsibility of guarding the gateway between the western and eastern provinces of Japan.”

This is a three-quarter reproduction of the main tower (tenshu) of the stunningly beautiful Himeji castle.  The strikingly white tower was first built between 1601 and 1609 and is still standing today. In 1993 it became Japan’s first world heritage site.

This approximately 1,700 piece build features the white tower design, the sloping roofs concealing a hidden floor, and of course, the mythological shachihoko (cross between tiger and fish) guarding the roof.