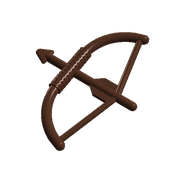 By Toxotis
28 comments
Why Deer?
I have never been satisfied with minifig-scale deer. Usually they are very “blockish” (not a word that should describe a deer) and they frequently resort to using non-Lego pieces.* I get it, Lego is “blockish.” But we all know that if we want to overcome this, we can. Red Deer is my response to this dearth of realistic animal mimication in genuine Lego (that was a mouthful!).
Why (not) Red?
Some of the pieces in these deer (e.g. the handlebar piece in the stag’s antlers) are, to the best of my knowledge, unavailable in the colors used for this build.  So, not only would this idea be an easy way to populate your Lego forests. It will, so to speak, populate them with deer that are red only in name, not color.
(For anyone confused that this idea is still called “Red Deer,” it is the name of a European deer species that looks somewhat red, albeit nowhere near as red as the Lego brick.)
The Project
The project consists of a red deer stag, a hind with her almost-grown calf, and a tree or two.  The deer are of the design pictured (allowing for improvements).  They have jointed legs and necks, enabling them to climb hills, jump over logs, and eat acorns in their Lego world. If this project were made into a set, it would allow this design for deer to be built in the proper colors.
*Here is a spectacular exception to my sweeping statement.