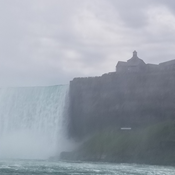 By TheMusicalBlocks2112
43 comments
"Pixar Soul" is  a minifigure-sized model displaying the two worlds portrayed in the original movie - the Great Before and New York City. Straddling the two worlds in the middle is Joe, playing his piano, as the scenes around him dissolve into one other. The walls, floor, and even the piano shift from the realistic colors of a jazz club in a vibrant city to the soft blues of the Great Before. The model includes minifigs for Joe Gardner, Dorothea Williams and her band, 22, and small heads for various new souls. There are two printed tiles in the model; one contains the name of the film, and the other displays a "Counselor" in the Great Before.
Pixar Soul is a movie about a New York City jazz musician that does not feel fulfilled by his life. Near the beginning of the film, he becomes caught between life and death, and escapes his fate by going to the Great Before. Here he meets 22, a cynical soul who has yet to move on to Earth because she has not found her passion. Out of fear of spoiling the plot, I will just say that the movie proceeds from that premise.