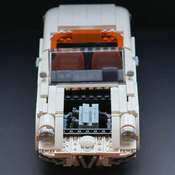 The 1993 Williams FW15C is arguably the most technologically advanced Formula 1 car ever built, featuring active suspension, ABS, and traction control among other features which were all banned by the FIA the following year. It was designed by Adrian Newey, one of the best F1 designers of all time, who managed to make it win both the Constructors' and the drivers' championships on the year it competed.

So it's pretty much a legend from Williams' best years and it should deserve to become a Lego set, which is why I decided to build this model.

What this specific model features is not much as F1 cars are rather 'simple' in some aspects, so it's only got an engine cover and a small replica of the Renault V10 it used behind a little bucket seat and a steering wheel with flappy paddles. However it has got a brick-built livery (the colour scheme at least, as it needs stickers for the sponsor logos), a completely smooth bodywork and a smooth diffuser for a better and more realistic look.

The car is built on a 1:17 scale and has 675 bricks, you can see what it should look like with stickers on the last picture, so expect more renders with the completed livery as updates.