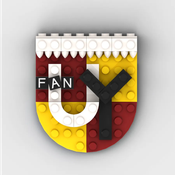 By bricks_fan_uy
98 comments
Home of the King of the Guardians of the Gray Castles (Black Falcons, as they are known by many), Guardians' Royal Castle stands ground against anyone daring to take the Falcons lands. Its a military powerhouse, but also a luxurious home for the monarch.
The Castle's Keep includes:
- A great hall with the King's throne.
- King's chambers.
- King's study.
- A stairwell to access the keep's rooftop and King's chambers.
- Four defensive turrets for archers.
- Two ancient Falcon heroes statues.
The gatehouse:
- Access from the bailey through indoor ladders and trapdoor.
- Machicolated turrets.
The towers:
- Walk through towers from ramparts.
- Falcons colored shield inlays on both sides.
- Machicolated tops.
The dungeon:
- Two prison cells to be guarded from the ramparts.
- Secret escape door allowing to exit castle by pushing the only blue brick in the wall.
The walls:
- Armory distributed all over the walls with helmets, bows, swords, shields, arrows and tools.
Royal stables:
- Room for two horses.
- Horse's barding stand.
- Horse's helmet holder.
- Saddle holder.
- Hay cubes and barrels.
Minifigures:
- 1 Guardians of The Gray Castles' King.
- 5 Royal Guards (aka The Black Capes).
- 1 jester.
- 4 crossbowmen.
- 4 archers.
- 2 swordsmen.
- 1 spearman.
- 1 horse caretaker.
- 2 mounted Royal Knights.
- 1 Wolfpack outlaw.
The goal of this design was to achieve a more polished look for a castle while maintaining vintage elements to it, not going for realism and keeping playability in mind in every step.