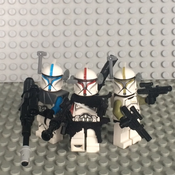 I think this would be a good Lego set because of the mech's great play features. It also has very articulous legs and arms. The arms consist of a gripping claw hand and blaster arm. The mech is very posable and has a great deal of armor on its body, legs, and arms. The mech has other details too, including its comm antenna and magnetic seal on its chest to keep the driver from bouncing around in the cockpit. The sniper has a rifle, night vision goggles and and a backpack with binoculars and a mount for the gun too. The structure is of a rock formation for the sniper to take cover behind or to add to the terrain of where the mech might be patrolling.

I built this mech because I have always liked the nature of mechs, in lego, ever since I was introduced to the product. The design didn't come easy though, I spent hours modifying the legs and arms to fit the torso and not have them look to bulky or too skinny. The hardest part of creating the whole mech was the main body and how to attach the lifting chestplate on without it looking like a flat base plate. There are many curves and ridges to help create the animated robot feeling. As visible in the pictures, there are many cooling vents and exhausts spread throughout the mechanoid to help in keeping the pilot comfortable in the temperatures he might operate in. I added the sniper behind the rocks to help add to the battle theme too. The name "Meatshield" stood out to me, because I liked how it described the fact that the suit is literally a shield that he's wearing. The hardsuit is a heavy lifting, smashing, breakthrough in science, technology and battle engineering.

If you liked this or know someone who would like the hardsuit, please share it with them and support.