Beauty and the Beast Live-Action Castle 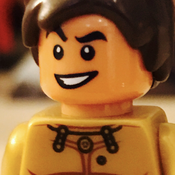 Experience the tale as old as time!

When Disney released their first trailer for their live-action rendition of Beauty and the Beast, I was inspired to create a project to coincide with the release of the film. I started planning out the design of the castle, the minifigs, and all of the features and functions that this set would come with. This project is everything that I wanted to have in my new Lego ideas creation.

There are several play features with this set. In order to captivate the likeness of the Beast's castle, I used medium cockpit pieces, traditionally used for aircrafts and automobiles for the round-like top. I took note of several other designs such as a longer, more open concept, but at the end I thought that this would look the best.  I added brick-built renditions of the enchanted objects, and used a regular Lego minifigure head for the Beast. Into my project, I have added the following characters: Belle (ball gown), Belle (castle grounds), Belle (celebration), the Beast, Chip the teacup, Mrs. Potts the tea kettle, Cogsworth the clock, Lumiere the candelabra, Madame Garderobe the dresser, and Belle's father, Maurice. Play functions: Moveable roof, moveable gate, and a bookshelf that can be rotated to drop books!