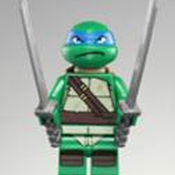 By KingToAD
2 comments
Here we have, my first Lego Cuuso Project!

So how did it come about? Being a child in the 1980's, I had the joy of growing up in a generation where children and family entertainment was at its most prolific. Two of the biggest players in this market at the time were Nintendo and The Lego Company, ring any bells? That's right, fast forward to 2013 and they are still here working harder to impress us with their products, innovations and ideas!

What is unique about these two companies is that they appeal not just to children but to adults as well. They both have the magic ingredient that can bring families/friends together and can offer both an enjoyable and therapeutic experience.

So why Professor Layton? After hearing that one of the most successful Nintendo/Level 5 series was, as we know it, ending, my mind started wondering what poor old Hershel and the gang would be putting their minds to next? And what about my own grey matter?

That's when it hit me! Why not create some of the most memorable Professor Layton moments in Lego, throw in an exclusive Minifigure with each puzzle and let the series once more give our minds the work out they deserve!

I have created a couple of classic puzzle moments here, get the Ball out and Wolves and Chicks.

Get the Ball out #1
Is basically a sliding puzzle where you have to get the ball from A to B by sliding the blocks around the given area.

Wolves and chicks
This is a puzzle where you have to move all wolves and chicks across the water via a raft whilst adhering to certain rules (for example only 2 animals on the raft at the same time and if you leave more wolves than chicks on either side the wolves would eat the chicks).

I feel that these puzzles would appeal to both children and adults, not to mention the massive fan base the Professor has (over 10 million games sold can't be bad)!

Is it too hard for the younger audience? Well in the games there is a hint system. You use hint coins to receive a tip on how to complete the puzzle. So how about bundling some gold Lego 'hint coins' in the box along with some cards that offer the hints. A solution card would also be available.

What about when I have solved the puzzle? The great thing with most of the puzzles was there was more than one version of it. So once you have solved Get the ball out #1 why not try Get the Ball out #2! By rearranging the puzzle base and bricks you could get variations of the puzzle to keep you entertained!

Each puzzle could come with a different minifigure that compliments some of the key characters from the series.

Also how about if you collected each puzzle you could combine the bricks to create an additional hidden puzzle (maybe a card is included with each standard puzzle that has part of the instructions for the hidden puzzle).

The images here are very basic but give you the general idea. Thanks to Lego digital design!

Chicks and Wolves puzzle created in Lego! The Brown base would be used as the raft to carry the chicks/wolves across.

Get the ball out puzzle base. As you can see the base of the puzzle is made up of coloured plates so that the bricks that go on top do not catch on the Lego studs and allow the bricks to slide. The colour coded plates allow for ease of setting up the bricks.

This shows the base and bricks in their built state.

The puzzle is set up and ready for you to slide the ball out of the exit!