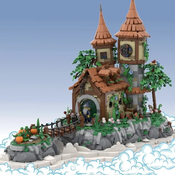 By piece to piece
29 comments
Night at the Museum
I really like the The Night at the Museum movies, which is why I made this model, which showcases the Museum of Natural History. I would like to clarify at the outset that this is an original work based on the museum seen in the film, but since CARLIERTI had already made an idea of ​​the museum in front of me, there are similar/identical things in the two works: interior layout, museum half-cut, gray brick socket, Globe design, two steps in the movies take us to the next level, here again only one can be seen. It consists of 3,000 pieces and contains a total of four figures: Larry Daley, Theodore Roosevelt, Pharaoh Ahkmenrah, Attila the Hun, and even two microfigures: Jedediah and Octavius.
I have also designed the front and inside of the Museum: the Museum has a ground floor, an upstairs level and a roof. In the middle of most of the Museum is the hall where you will find Rexy the T-rex, the big globe and Theodore Roosevelt’s horse and other accessories: lamps, plants and newspapers. The walls are decorated with paintings and flags. Outside the hall, there are several smaller rooms in the museum: The first is the jungle showroom where we find Dexter the monkey and a lot of the plants found in the jungle. The second is the cleaning ceremony, where you can see shelves - bottles on them - chests, plus barrels and a bag. The last room shows African animals and their characteristic landscape.
The next level is also full of curiosities: on this level is Attila’s Hun, Easter Island Head and Jedediah’s Wild West Model, where Octavius ​​is also found. There are also small and large accessories on this level: cabinets, plants, lamps and newspapers.
The last level is the roof level, where there are crates and a bucket.
If you also want an official LEGO set that takes the Night into the World of the Museum, please support this idea and get 10k votes together, thanks in advance!

By piece to piece
29 comments