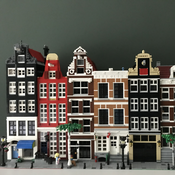 By cpt-urco
126 comments
Amsterdam Canalhouse
When I was a child I played and build with Lego a lot. When I grew older it got less until I begat children of my own. When my son was a few years old he got his first Duplo sets but soon he got to old for that. On a search for his first Lego set i came across the more adult sets by coincidence, and fell in love with the Modular series. I only knew Lego from my childhood 35 years ago, and I didn’t know Lego had developed such great expert sets. From one thing the other came, and soon I bought a Modular. My best buy was the Parisian Restaurant. In this period I discovered that there’s a whole community out there with adult fans of Lego. They build such great things that I didn’t know it was possible with Lego. I was inspired and tried something myself. First builds didn’t look great actually. But here I am with a Legoideas project.
As I became a big fan of the modular series I’ve learned Lego gets their inspiration from architecture worldwide as seen in the Parisian Restaurant. The  latest model, the Bookstore, has a gable that was actually inspired on an Amsterdam canalhouse. I always wondered why Lego hasn’t created a modular canalhouse as several Lego themeparks have an Amsterdam scene. I thought it’s a missing set for the Lego fans. I started an account on Instagram to share the wonderfull designs from many different builders and started to create my own for Legoideas. I wanted to share it with Legofans because it’s so much fun to built a canalhouse with all the little details you can put in the design. The real canalhouses have so much history and where built in the “Golden Century”. These houses are small and tall and in the building where small shops. They where used as storehouse, to stock trade goods, and the owner of the business lived there with his family and often the employees lived there too. The owner used to live on ground level and first floor, as the employee lived on higher level with smaller space. The rest of the building was used to store trade goods and was used as a company.
The Canalhouses are small and tall. The inside stairs are relatively small too. To move the goods up to the upper levels they used the hook outside to lift it all the way up.
Canalhouses have many different gable designs. They don’t really have a functional reason. They where meant as a show off. It was a way to show how whealthy a company or owner of the building was. Like in our time people show how expensive and big their car is. Or your Lego collection ...
In this building i chose to design a so called “halsgevel”. In the design there are some golden pieces that points to the Golden Century.
The outside of the building is black. In real they are often black and this color is the most recognizable when talking about Canalhouses. As for the Lego model, choosing the color black, came with a challenge. It’s hard to create “light into a black box”. I believe a good Legoideas has to have playability and must be colorful to encourage playing your minifigure story. I think it’s well succeed, have a look inside the pictures.
The Canalhouse has a souvenirshop on streetlevel. The owner is a Hipster kind of guy who sells postcards, Dutch clogs, mini modular Canalhouses, mugs in red white and blue, and you can even buy a football shirt from the worldwide famous local soccerclub. Their biggest star was Johan Cruyff.
The rest of the building lives a family. Dad, Mum and their children, a boy and a girl. The house is fully furnished with a kitchen annex dining on the first floor. The second floor has a living room where the family watches tv and has good conversations near the fireplace.
The third floor has a small bathroom, a toilet and the master bedroom for the parents.
And on the attic, with an easily roof part you can remove for playability, there is the 2 children’s bedroom.
The whole building is modular so all levels are easy to separate and to play.
On the last picture are the minifigs that would be in the set. From left to right: family with mum, dad, boy, girl and grandma who is visiting. The owner of the Souvenirshop. And a citizen who is letting his dog out. There’s a bycicle and on the attic the housecat from the family they all love to cuddle.
Overall I believe it will be a fun set to built with some interesting techniques, but not to hard. The set would be a great stand alone, as a give away present for a Legofan of all ages from 12. But it would also be a nice add on for your modular city. The basic color is black but with a lot of white details and the tan color gable, it has just the right scheme to fit in any city.