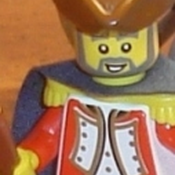 By Nathan
39 comments
I really liked that last year’s winter cottage set strayed further from the main street and into the back roads of the winter village. This model, built in the style of an official set, expands upon on the handicraft theme of the cottage's wood shed and small workshop, embracing a "rural industry" motif for which I have everlasting affection! Now since the winter cottage residents seem to cut their own timber, this lumber yard doesn’t sell firewood or Christmas trees like some do, but it does supply the local toymaker with materials for assembling those model planes and boats as well as contractors with construction supplies for building new Winter Village establishments.

I based the specifications and basic characteristics of this model primarily on the cottage, including minifigure count/demographics (I have an 8:3 male to female ratio and a 1:4 child to adult ratio) and layout (the shop stands in for the cottage itself, the covered cantilever rack for the shed, and the radial saw with the generator for the igloo while the forklift stands in for the plow truck and the snow blower for the sled). As a pleasing seasonal element included in all four winter village sets to date, I decided to build the holiday lamppost in a style mimicking the prefab part which I don't own in black. While the earlier two of the four models opted for a less complex, brick-built solution for the bottom of the post instead of the prefab part, the very first went for a contrastingly more inventive upside-down construction for the lanterns which I have attempted to parallel. 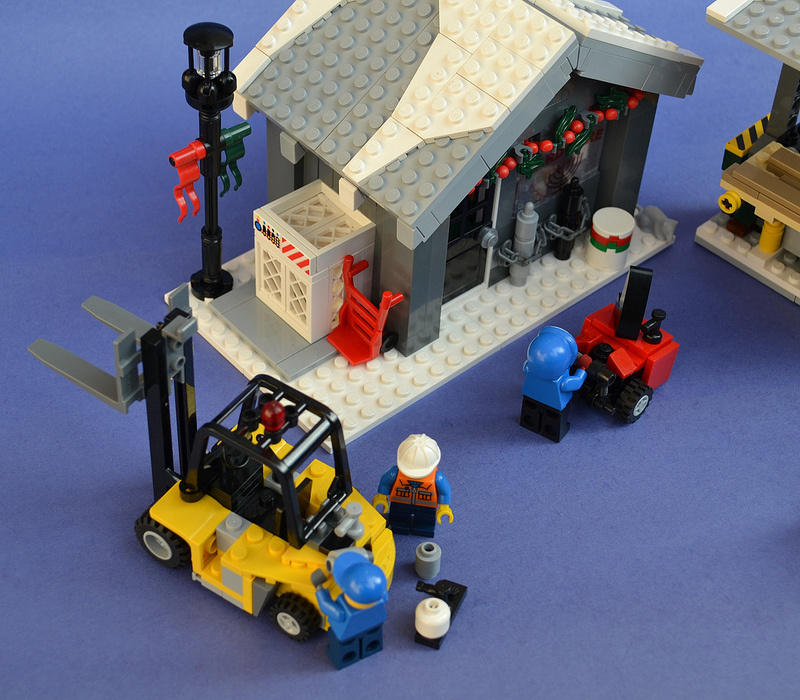 Beneath the lamppost, two kinds of propane tank are stored in a cabinet cage under international hazardous substance labeling. One is a utility variety used for the forklift, and the other is a consumer variety like those used for barbecue grills, which are not as popular in the winter, but also for portable heaters, stoves and generators like the one powering the saw (with the "gas tank" colored green to symbolize that it runs on cleaner burning propane). Two gas cylinders containing less flammable carbon dioxide and nitrogen gas are chained upright to the facade (the red hand truck stands by for their transport) and a garland of holly crowns the window with a custom decal that reads “HARDWARE” and depicts a menorah popularly displayed from behind the glass for the larger holiday season. 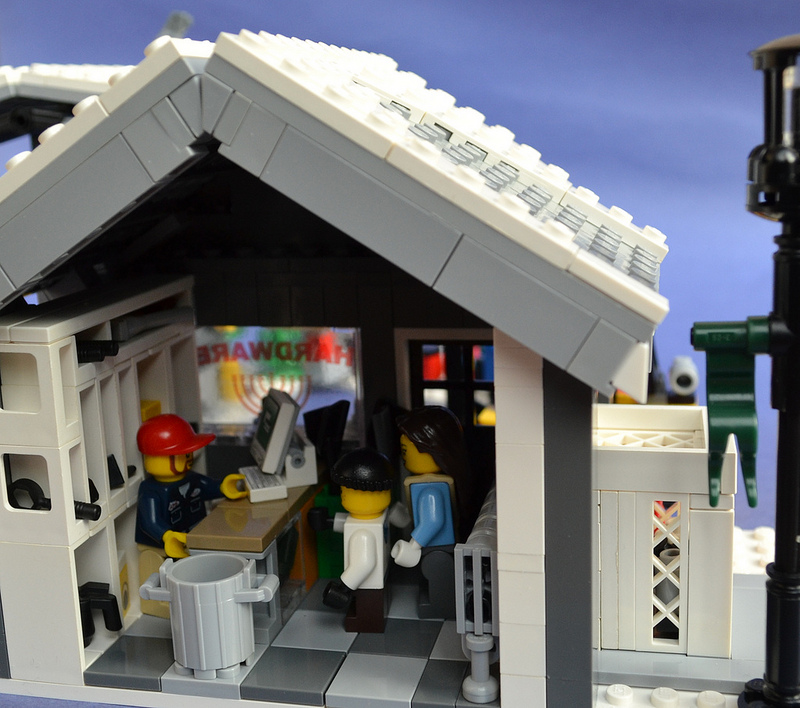 Inside the shop, snow shovels are stocked in a bin at the entrance due to popular demand. Bags and buckets of salt and sand are also available behind the counter, along with typical hardware store items. The counter’s glass display case houses a cordless drill and carrying case, the perfect holiday gift for any handyman or -woman! 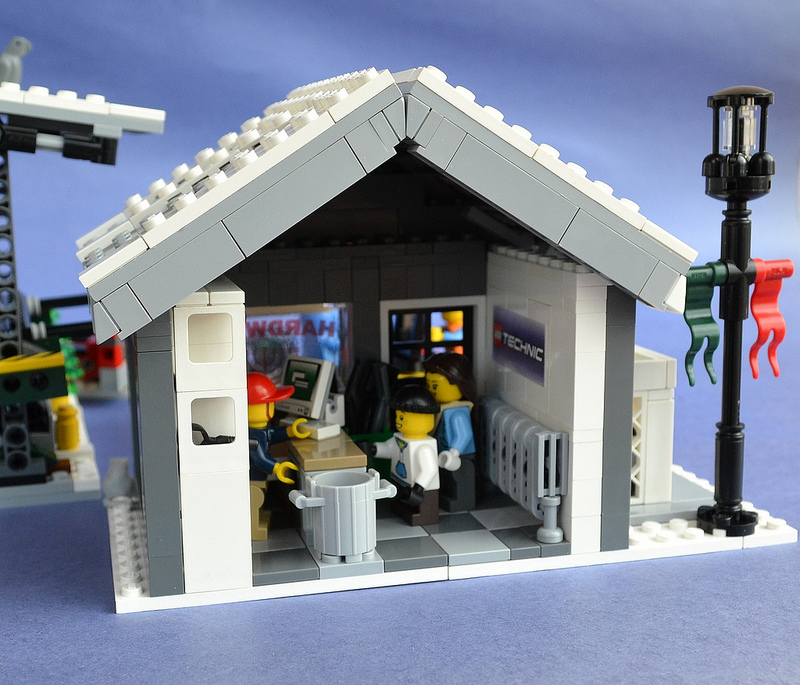 I decided against using a light brick here as I thought the shop should be heated by an old radiator rather than an open hearth, and I didn’t want to install one under the roof like in the Winter Village Post Office due to the awkwardness of holding the switch in to keep it lit. I have however incorporated great playability potential into the lumber yard provided by the adjustable height feature of the cantilever shelf which elevates lumber underneath the roof (and locks in place by the action of the elastic band pin system) for its protection from winter precipitation and allows the forklift to access a supply pallet nested underneath. 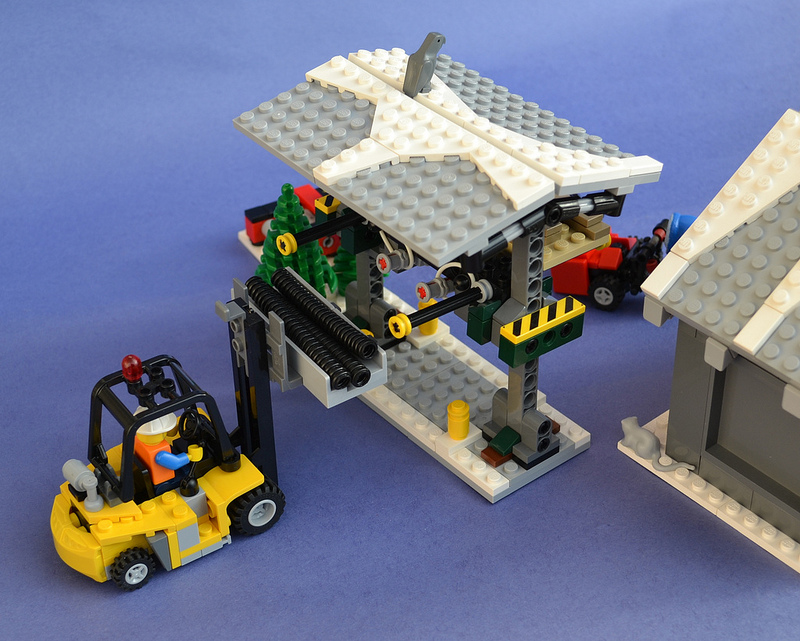 Finally, once the lumber pallet is taken down, individual boards can also be fed into the lumber saw vise using the spinning rollers as gramps here demonstrates.

Closing remarks: credit to MOCpages user A Taylor for the gas cylinder design and acknowledgements to Mike "Count Blockula" Crowley for radiator inspiration. Larger and un-cropped photos are available for viewing in this flickr set.