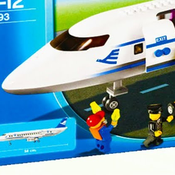 By Tom7893
19 comments
Welcome to this Smurf's village!
This Smurf´s village is build on 4 32/32 plates. There are 3 Smurf´s houses: Papa Smurf, Smurfette and Smurfling's houses. Around the houses there are three smurfberry bushes with growing berries. Next to each house there is a lantern with a candle. In the middle of the village there is a big mushroom and the ladder, so the Smurfs can climb on it. At the edge of the Smurf's village hard-working Smurfs grow their own vegetable. Next to the field there is a public fountain with fresh water.
Papa Smurf's house is furnished with a bed, a table, a library and next to his house there is barrel with water and rubbish bin.
Smurfette's house contains shelf with a comb, a bed and next to a house there is a barrel with fresh water and a garden.
In Smurfling's house there are two beds and a toy box and around the house there is a swing and a bench.
Smurfs grow their own vegetable like carrots, potatoes, lettuce and pumpkins and they use different tools.
Around the public fountain there is a jar and a bucket.
There are 8 Smurfs: Papa Smurf, Smurfette with baby Smurf, Pushover Smurf,  Smurflings: Nat, Sassette, Slouchy and Snappy.
I made this set because LEGO company has not worked up Smurf's topic what is really a loss. Since LEGO company and Smurfs both originated in 1958 and survived up to the present days it would be brilliant if this Smurf's LEGO would become reality.
The set is built of 3000 bricks.
[IP: Smurfs created by Pierre Culliford (PEYO)]