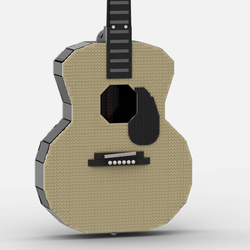 Lego Brick Brad
76
348
days left
Alrighty, second time's a charm! I took a lot of fan feedback from my first campaign and tried to implement it here. The guitar has had some small upgrades in design and color. I've added the inclusion of 5 guitar picks, strings (see second picture), and the coolest/most exciting thing of all is the included  concept of a "chord creator" app somewhat inspired by the recent Lego Grand Piano sheet music playback. With that you would create chord shapes or patterns on the neck using colored tiles or dots, scan the patterns with a special app on your smartphone, and then you could hear acoustic guitar music playback depending on which chord design you build. You could then place your phone near the guitar (or sit the guitar on a stand and put a Bluetooth speaker behind it) to create a neat musical art piece that actually produces music! The #1 question I had with my first model was "Can you play it?" and while I have yet to engineer a way to actually build a playable guitar I thought this chord creator idea might offer an alternatively unique and interactive way to still give life to the build once finished.
The guitar body design is actually inspired by my very first guitar, which was my Grandpas, so there's a little bit of my own history and a lot of love put into the build. I've been playing guitar since age 11 and have been a touring recording artist and songwriter since 2001. I've always loved Legos and as a father of three I now find myself building often with my kids these days. Wish me luck and thanks for voting!
76
348
days left