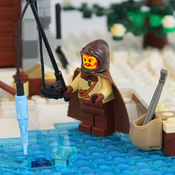 This model shows an old port with a tavern, where the seamens and fishers have a trink after their long and hard day on the sea. Next to the tavern is the warehouse, where the goods which come with the ship will be stored. With the crane you can lift up the barrels into the warehouse. The tower protects the port against pirates and robbers. The floors can be separated. So you have always the best view on the facility of every building. In Addition the houses are on the backside opened. The model has a lot of details, which make the set very realistic.

Why I built this model

I built this model, because I like the sea and the buildings at the sea. I also like the feeling of historical buildings and the atmosphare which comes with these. So I had this idea and I started building it and it was not easy. I often had to find alternatives, because I did not have enough stones.

Why this model could become a real Lego set

I think this model shows a great sea and port atmosphare. You could also make a series of models with the sea at the frontside. These models could be combined such as the creator buildings. Than you would have a real coastline with a lot of other beautiful port buildings such as a shipyard and more.

I am happy about every support and I thank you for supporting this model.