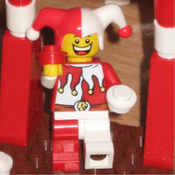 By Idolikecake
0 comments
Hello everybody !

Thank you very very much to have come to take a closer look. Most of the work is already done. :)

The minifigures I have put in my project are just random choices out of my collection and pure examples to illustrate the whole project.

It is a family pick-up with five seats. That means in my example, enough place for the parents on the two front seats of the car and three just behind for the children. I wanted lots of details on the car.
To begin with, there is a car brand. I chose BMW, and in preference, in very big. But to avoid license problems, it wouldn’t disturb me if LEGO would prefer to use his home-made brand, Octan. (For those between you who find a BMW pick-up strange; the BMW Group did produce as a matter of fact once a pick-up (seen march 2011); but it was a private joke of their engineers and it was never released…)
There are lots of lights, big rear-view mirrors for a big car and two impressive radiator grills left and right of the brand, like it is usual by BMW cars.
Not to forget, the very important detail of the license plate of the car. IF the project ever has the chance to become one day a real LEGO set, my own initials would appear on it. 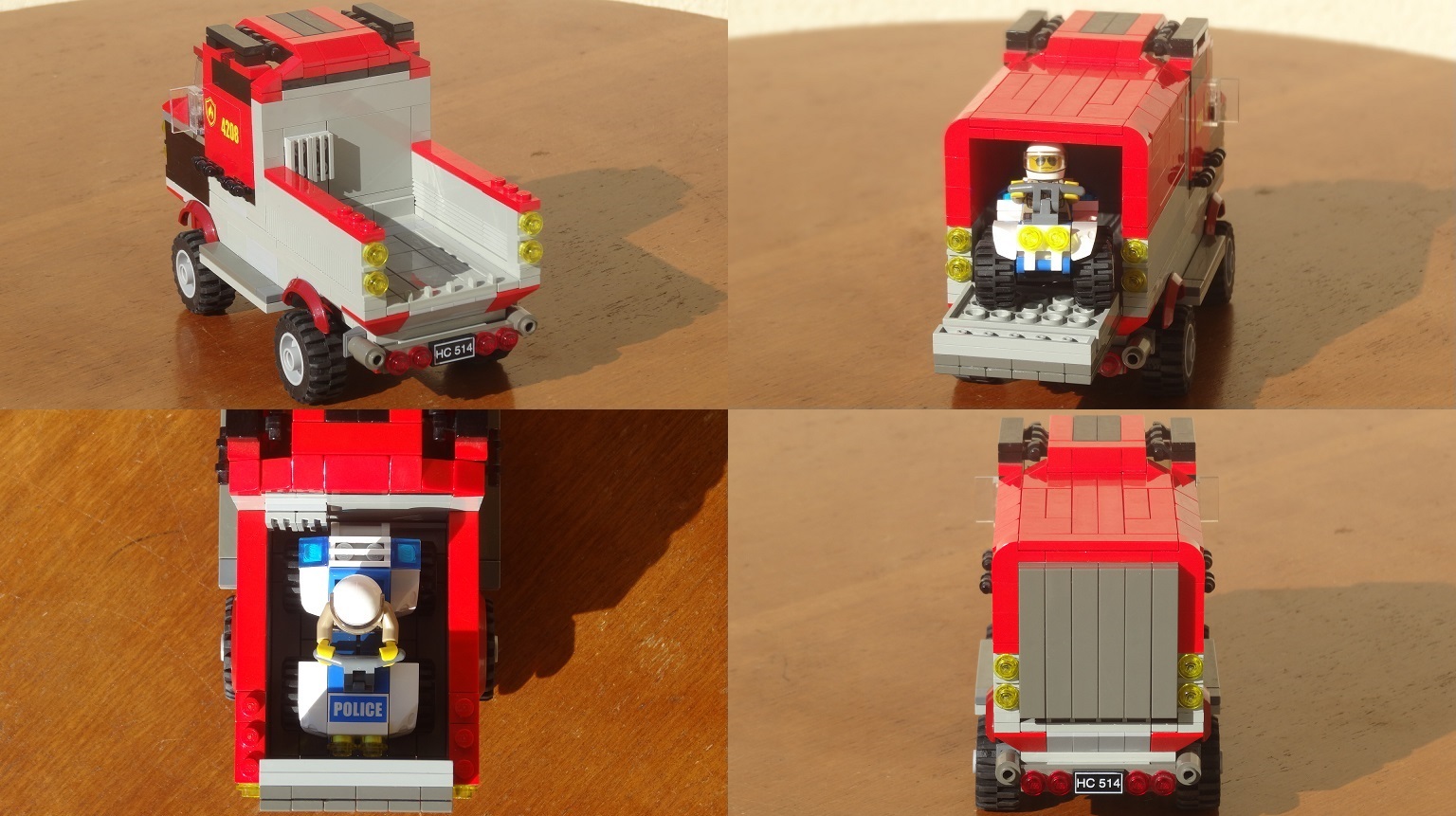 Right, a pick-up can’t be a pick-up without enough room in the back to tide up things. I finally managed that much room there, that it became even possible to put a whole little car with driver in it! I used the little police car of the LEGO set 4437 for example.
The project the closing roof and door of the pick-up are part of the project. The picture above on the right can maybe be misleading, but I can guarantee you that the car can come out without any problems. The little bit that the helmet of the driver touches the roof is just enough to prevent that the car graves of the pick-up when you move the vehicle.
Otherwise, you can see a footboard and an exhaust pipe on each side with a license plate and again lights. 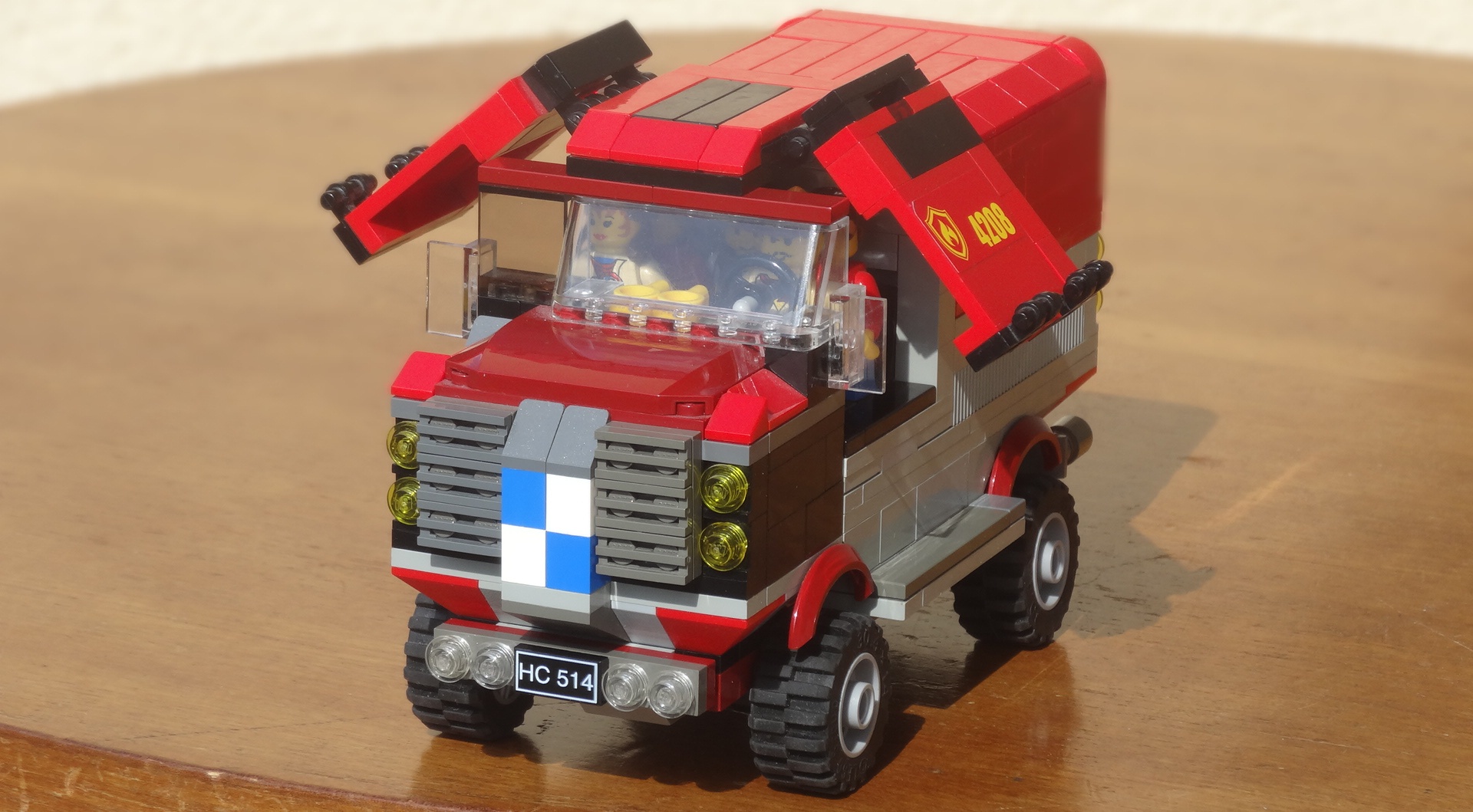 The doors of the car are visible here. (I’m sorry for the stickers of the LEGO set 4208. The doors are of course not supposed to bear them…) And you receive maybe a better look on the whole car due to this picture. 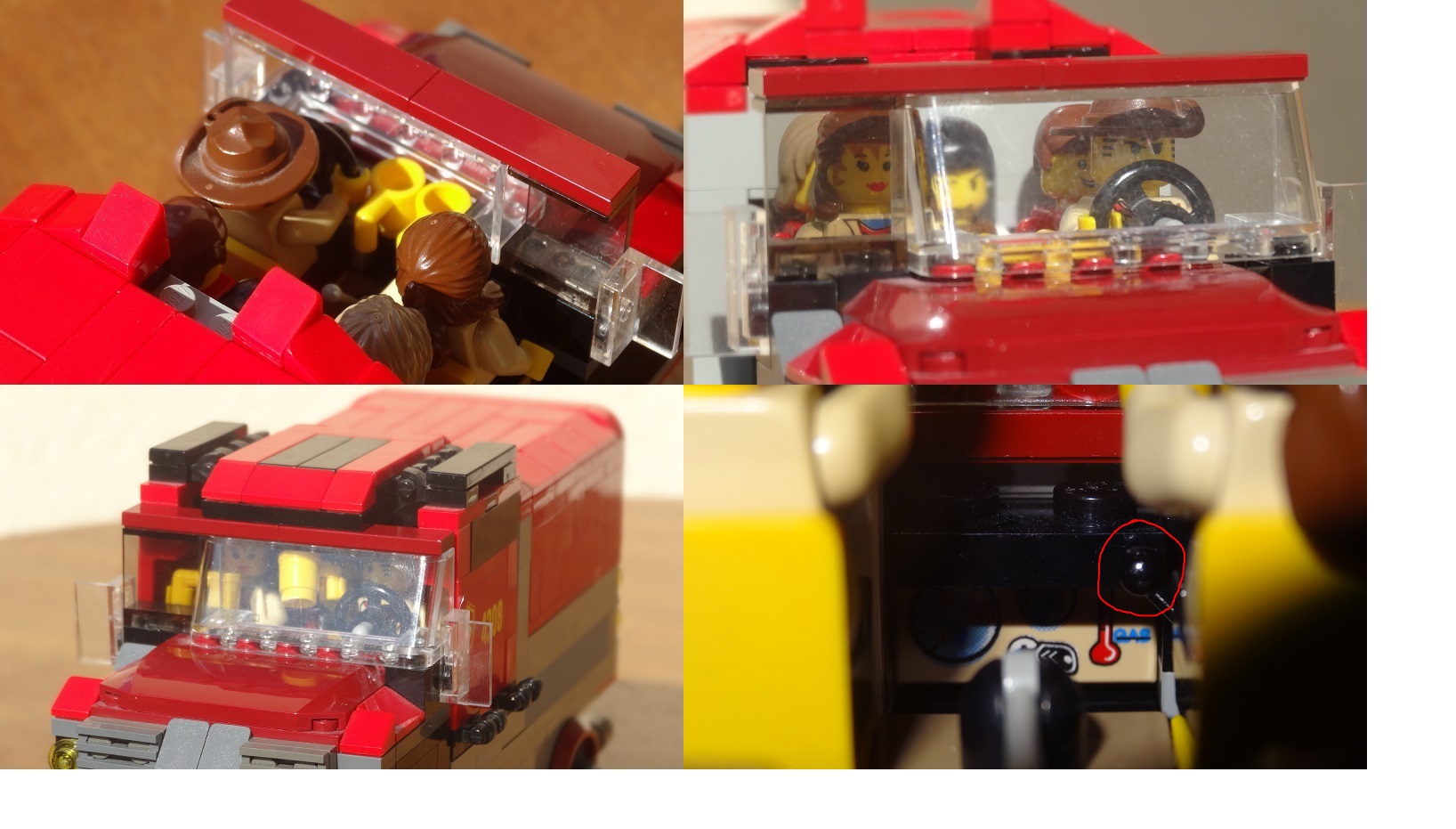 My little coffee-gadget idea (it was, strange enough, pretty complicated to achieve… (mostly because of the horrible lack of place under the hood of the car)); the two pictures at the top show how the mugs are ready for utilisation without, however, disturbing. And the pictures at the bottom show how the holder can be pushed back after the mugs have been taken. A simple, little http://peeron.com/inv/parts/4593 piece (picture below of the right, watch to the red circle) does also a great job by preventing that the holder comes unfortunately back.

By the way, now we can see a bit of the inside, we can see better the big wheel of the car, the clutch and even on the picture below of the right the ignition key of the car (and some other nice details like the fuel gauge or the speedometer) thanks to the excellent printed LEGO piece http://peeron.com/inv/parts/3069bpx23 (where you discover the little blemish of the project; according to the keychain of the ignition key, the car is supposed to be a Citroën! :D ). 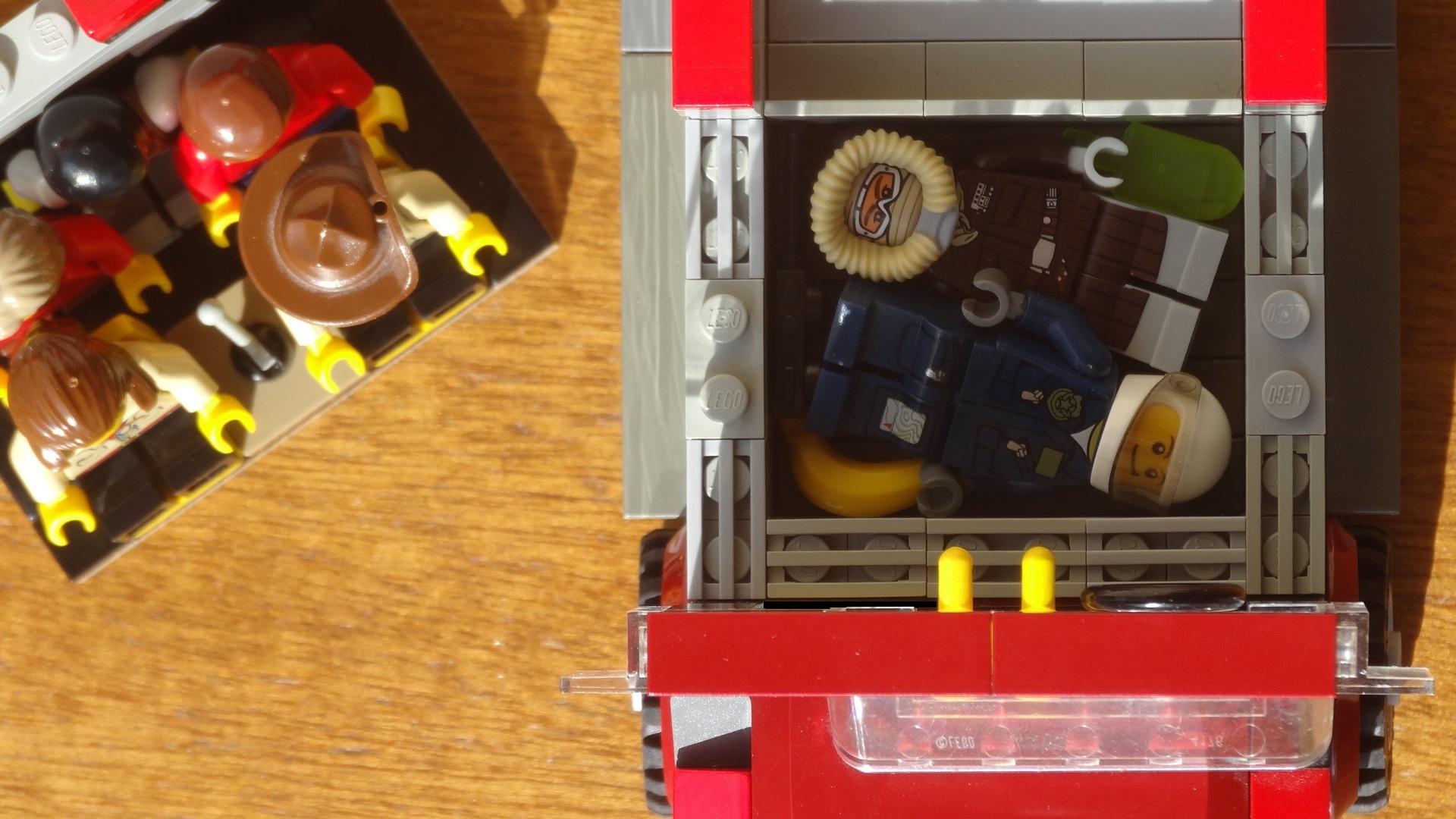 Well, a little surprise to finish well; a secret, hidden place! It has lots of place, for example for two minifigures with accessories (an ice cream, a banana and a walkie-talkie).

Hopefully I succeeded in convincing you, that this set would be great to play with. Especially for children I think, due to the still minifigure size, and the different features. :)

I have one other Cuusoo project, don’t forget to check it out!
Thank you very much for your support!