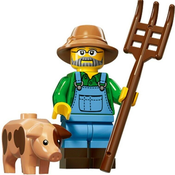 By JacobHorn
24 comments
While Blacktron, Ice Planet, and Spyrius each had their own basecamp in the 1990’s, Space Police never had one of their own until now!  This secure jail on Prison Planet holds the most dangerous criminals in the entire galaxy and is overseen by Captain Magenta and his trusty Bot Assistant.
Each faction has a new mid-sized vehicle to help them break out or apprehend fugitives.  The Blacktron Bulldozer has the power to break in and ability to drag a containment cell that’s holding one of their own.  Doctor Kelvin and her Saturn Sled can cruise around and pick up any escaped prisoners who managed to escape.  And the Spyrius Stunner zips Major Kartofski away to safety!
From a practical viewpoint, all bricks used in this build would be found at the time each theme was first introduced (except for one brick, maybe you can find it!)  The Blacktron Bulldozer and the Saturn Sled use technic pieces that can latch onto a Space Police jail cell to transport it (either away or returned to Prison Planet)
I designed this set in homage to my brother who shared my love of LEGO. While he had every Spyrius set, I was more fascinated by the Ice Planet side. My hope is that these mid sized vehicles can be used more in play for a younger audience or as a whole for an older collector.