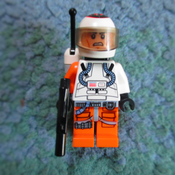 This is a version of the rebel laser turret on Hoth. The turret can rotate on itself, the cannon can rise and lower and the whole upper part can be moved to show the control station under the turret. I've used only the bricks we can find now in every Lego set (wether of Star Wars or not), so that it can be easy to build.