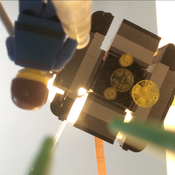 And the loin slowly creeps up upon its unsuspecting prey…….but the ostrich suddenly suspects something is a miss…..and makes a speedy getaway.

Have you ever wanted to own your own Sir David Attenborough wildlife set?   Now you can by voting for my creation.  It comes with an Antarctic, a Galapagos Island and African safari scene. The Antarctic scene includes, an iceberg, two penguins, and a boat with a cameraman and director. The African safari scene has a jeep, giraffe, ostrich, small filming hut, cameraman, and jeep driver. The final scene, the galapagos islands includes, two tortoises, a big island, a smaller island, sea lion,and two camera men.

In total there are 7 mini figures and 7 animals. If you are a animal lover, or fan of the british pop culture this set would look awesome on your shelf next to your doctor who tardis and beatles yellow submarine.

If you are a diehard fan of Sir David then this is a must have for you.