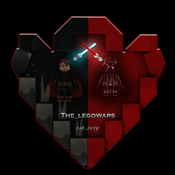 The Saloon
This build shows a western Saloon from 1850.
I came up with this Idea to build an Saloon while I was playing the Video Game Red Dead Redemtion.
Another reason why I build this, is because I grew up with cowboys and Indianas and there were a big part of my childhood and of course I was inspired by Movies like Winnetou or the Tarantino Films.
So I build this Western style saloon inpired by movies and pictures, mixed up with my own immagination.
I think it will make a great Lego Set because a lot of people grew up with Movies like that and an Saloon would represent a lots of people´s immagination in real life and a some fantastic memories.
It includes 5 Minfigures, a kitchen, two big tables with food and drinks. A balcony a water hole for horses an dog and an scorpion, several shovles, guns and a pickax and a few plants. As well an antler with skull of a bison.
Facts:
Pieces 1435
Costume Pieces 17
32x32 Baseplate
ca. 20 bricks high
MInfigures
- Cook
- Indiana
- Sheriff
- Rogue
- Lady
Thanks for supporting and reading ;)